THERE’S MORE THAN ONE WAY TO BE ON THE MOVE

Now more than ever, there are multiple ways to get around: by car, but also by bicycle, by scooter, by train, by plane and, in many urban areas, by a solid network of public transit that includes both underground rail and bus routes.

For a long time at Michelin, we’ve believed that public transportation can improve the quality of our lives in motion: it’s more sustainable, safer, less congested, more convenient and quicker. That’s why we’ve been making underground train tires since 1951 and today, more than 70 years later, we equip over 60 urban transportation networks across 20 different countries.

By equipping the rail networks that help move over 10 million people every day, Michelin simplifies your commutes and contributes to decongesting urban environments.

Michelin fights waste by developing tires made to last.

PERFORMANCE MADE TO LAST

Michelin equips those who cannot be stopped by winter.

Michelin design process aims to continually reduce the carbon footprint of our tires, from when they’re produced to when you’re driving on them.

With electric mobility on the rise, Michelin develops tires that increase the battery range of vehicles.

Everywhere in the world, the MICHELIN Guide recommends the restaurants worth your trip and offers more than 3000 starred restaurants over 32 countries.

Michelin is trusted to equip one out of three commercial aircrafts in the world, and ensures your safety while landing at up to 420km/h. 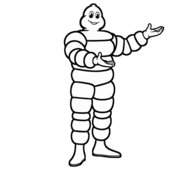 Michelin offers a wide range of products and services

Find your tyres in a seconds

Thank you for subscribing ! We are excited to talk to you soon.

You are using an unsupported web browser
You are using a website browser that is not supported by this website. This means that some functionnality may not work as intented. This may result in strange behaviors when browsing round. Use or updgrade/install one of the following browsers to take full advantage of this website